October is a difficult month, as attested to by teachers and parents. It is packed full of events and increasing busy-ness at school, as well as a time when students start pushing boundaries in class and in the school (the “honeymoon period” is over). Last year, I stopped blogging in October, and didn’t pick up again  for over four months.

This year, although I only managed one post in October, I am committed not to let a four-month hiatus happen again. So many interesting things happened in October that I need to tell everyone about: a CyberSecurity Awareness Day trip to Lockheed Martin, some great sessions at NCTM Baltimore, meeting up with other blogging/tweeting math teachers at NCTM Baltimore, learning about new engineering curricula at UMBC (and finding out about required equipment we don’t have!), a visit from the National Academy Foundation to view our progress toward becoming an Academy of Engineering, collaborating with an art teacher on a fractal printmaking project, and a trip to the National Mall in DC for the first-ever USA Science and Engineering Festival! And even more fun is coming up over the next few weeks: an advisory board meeting, a career & tech ed expo, the high school fair where we recruit 8th graders to come to our school (and our engineering program), and most especially: our third annual STEM Competition is planned for November 18th!

So, endeavoring to combat the October and post-October craziness that leads to a lack of blog posts, I have decided (to attempt) to participate in NaBloPoMo! [See info here and here.] Though this may be doomed from the start (especially due to Thanksgiving and my college homecoming falling within the month of November), I shall make every effort to post each day for the entirety of this eleventh month.  And with my first post now done, here goes!

A twitter colleague, @druinok, posed the following challenge, which prompted me a great deal of thought: 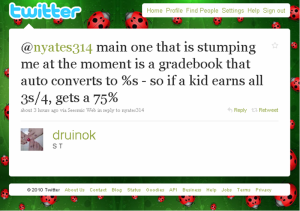 How do you convert from standard-based grades (often on a 1-4 or 1-5 system) into a percent score required by a gradebook or school district, while still maintaining a sense of what the 1/2/3/4(/5) system means?

While the formulas involved may be too complicated for a gradebook, I approached this problem mathematically: can I create a map from the SBG 1-4 system to the grades I believe they should represent? My understanding of the SBG system is as follows, which informed my selected points and function choice:

In my conversation with @druinok, she stated (and I concur) that a student with all 3s has met all standards and should receive a B+/A-. All 4s should clearly represent 100%. In my opinion, all 2s should be enough to scrape by with barely passing the class (60% or D); some may argue that since that student has not shown mastery of the standards he or she should receive a failing grade.  A student with a 2.5 average (half twos and half threes, e.g.) should receive a C. A student with 1s should not pass. In my district, the lowest grade we can assign on a report card is a 50, so a 1 average yields this.

In playing around with the numbers, they seemed to fit naturally into a symmetric pattern around 2.5 = 75%. This in turn prompted me to find differences and look for a cubic equation with inflection point around (2.5, 75).

My first attempt is odd since it reverses the independent and dependent variables (x/y). My second attempt is more understandable and develops the equation

. Its graph is shown below.

I also tried a third attempt with different points (3=85% & 2=65%) since I was slightly unhappy that the above function from my second attempt was not monotonically increasing on the interval [1,4]. Still, my second attempt is closer to my understanding of the 4-point scale.

For what it’s worth, I also tried fitting a 5-point scale to percentages.

Anyway, that was a bit of fun. But the formulas aren’t perfect, and are certainly a bit complex for gradebooks (the original challenge).

So my main point in writing this post was to ask: those of you who are standards-based grading aficionados, how do you handle the conversion to a percent or letter score?

Certainly any solution, whether it be a formula like this or a more holistic approach like “a student must meet all standards with a 3 or higher to achieve a grade of A, etc”, must involve clear and open communication about the grading policy with students & families.

Back in August, I set myself a goal of nearly paperless teaching.  For several reasons, I have not been able to go completely paperless, but I am certainly using less paper this year than previously.

I still usually print out quizzes and tests, though I have made forays into online quizzes.  These have been difficult to make in the school’s learning management software, Blackboard, while other formats that other teachers around the country have used successfully (e.g. Google Forms) have been blocked by the school’s network.  In addition, I print out photos of student work and their reports/presentations, for inclusion in students’ portfolios.  My students also maintain an online portfolio, but are required to have a binder portfolio for their engineering courses.  I also sometimes still print out homework assignments, since I believe that students who have a piece of paper in their hands are more likely to complete the assignment.

While ‘paperless’ would be an inaccurate descriptor of my teaching this year, ‘lesspaper’ is an invented adjective I can absolutely apply.  I am printing and copying much less than last year.  I also make sure to direct students to recycle rather than trash any paper they do use up.

For Earth Day last week, I pledged with 1500 other teachers worldwide to teach completely without paper for a day.  I had limited success in that I taught my two courses without paper (caveats below my description of how I taught paperlessly)!

Now for the limitations, due to encountering the unexpected realities of daily teaching:

An advisory session with my homeroom students, normally scheduled for Wednesdays, was at the last minute postponed to Thursday (Earth Day). I had already photocopied the standardized lesson on Wednesday before being told of the postponement, so I went ahead and used those papers to guide my advisory meeting. It did not seem worthwhile to waste the already-copied papers by placing them directly into the recycling bag, in order to come up with a new non-paper activity. The same day, another teacher was out sick, and he had left a paper assignment for his class, which I watched for one period. So I handed out that paper to his students.  Finally, a student cut my class that day, and our school only accepts hard-copies of cut slips or other behavior referrals, so I did print out a cut slip for that student.

As you can see, it’s difficult to cut out paper entirely for even one day!  But I am happy about the successes I have had in lessening paper use in my classes, for Earth Day and throughout the year.

If you’re interested in the idea, more ideas for teaching paperless lessons can be found on the Teach Paperless Blog, the Paperless Earth Day Wiki, and the Going Paperless Google Doc.

We wish you a merry August and a happy new year!

Today here in Maryland, students begin a new year of school.  Teachers (like me) started last week, and have had a week full of meetings:  department meetings, academy meetings, district-wide meetings across town in an empty school.  Plus one day to set up our classrooms for the new school year!

As I write to you, I am beginning my fourth year teaching here in Baltimore, where I teach math and engineering at a large public high school.  Although I have greatly enjoyed learning and then teaching engineering each year, my first love is mathematics, and it is math and math education that I wish to be the main foci of this blog.

As my inaugural post, I wish to meet Sam Shah’s challenge and declare a triplet of New Year’s Resolutions that I have set myself:

Thanks for reading!  And please let me know your thoughts, especially on how best to implement videos in class.

* I can remember getting into school at 6:30am, the first teacher there, turning on the copier and making thick, many-paged packets for my engineering classes.